Here’s another certainty for you: If John Goodman is in a Coen brothers movie, he’s going to be a monster.

No exceptions. Consider Gale Snoats in Raising Arizona. Consider Karl Mundt in Barton Fink. Consider Walter Sobchak in The Big Lebowski. Consider Big Dan Teague in O Brother, Where Art Thou?, and then consider this: Roland Turner, the junkie jazzman of Inside Llewyn Davis. It’s Goodman’s best role yet, in the best Coen brothers movie yet.

Inside Llewyn Davis is a masterpiece of all things film. It reminds me of Barton Fink, in that it’s about an idealistic New York artist whose life enters progressive collapse, but its ambition is restrained. Llewyn’s purpose is small and specific: it means only to explain how its title character winds up beaten in a back alley. It walks to that line and then stops, and this frustrates people, because the story leading to the event is so captivating.

Llewyn Davis is an aspiring folk singer in the 60s, and a mess of contradictions. He has an image in his mind of what a musician should be, and he feels that uncompromising adherence to this image should be enough for him to find financial success. Of course, this attitude gets him nowhere: he surfs couches, eludes pregnancies, judges his peers, and generally bums off everyone he knows.

When a fellow musician offers a car seat for a trip to Chicago, Llewyn sees a real opportunity to break into the business and turn his life around. Maybe, once he gets there, Llewyn can get face-time with club owner Bud Grossman, and land himself a serious gig. It’s during this surreal sojourn that he becomes trapped with the grumbling beatnik Johnny Five, and the ultra-hip Turner.

Turner reminds me of Barton Fink’s W.P. Mayhew, in that he’s also an older, more successful version of his film’s protagonist, but who is also broken down, washed up, and chemically dependent. Worst of all, Turner is unlikeable in the worst possible way: he’s a complete and irredeemable egotist. Like the know-it-all at your office, Turner has an opinion on everything, and he’s happy to let you know about it. To him, folk songs are a joke, and only jazz counts as true music. He considers himself a master pool player, and a worldly connoisseur of food, though some of it makes him shit himself.

Turner occasionally shows interest in Llewyn’s life, but it’s only so he can find a platform to spring into stories about himself. Aside from that, Turner peppers Llewyn with insults, jabs him with his cane, and requires frequent stops for “bathroom breaks.” The only peace Llewyn gets on the trip are during the long periods when Turner’s zonked out on smack.

In time, Turner waddles into dangerous territory when he asks about Llewyn’s former singing partner, who committed suicide. This is a subject that, for Llewyn, is still fresh and painful, and even touching on it causes him to lash out in anger. Of course, Turner doesn’t touch on it, but stomps on it like a child on an anthill, and so Llewyn quietly threatens him.

In response, Turner explains that he’s a practitioner of Santeria and other strange arts. He tells Llewyn that he’s above the folderol of fist fighting; he has the power to curse people. At first, this bluster sounds like the “Real mature, guys” thing that nerds use on bullies, but one must wonder, in light of the events that follow, whether there’s something to it after all.

Going over this, I’m not really sure why I find Roland Turner so fascinating. Maybe it’s because I feel for his rap, as it were. He’s a terrific asshole, forever in the process of salving his own ego. He is proud to be so many miles above the rest of the world, and yet he’s bitter that the world doesn’t understand his greatness. His character is a sad warning to Llewyn, who is similarly deluded. The fact is that Llewyn may not be suited for the life of a professional musician, but to him, anything else is mere “existence.” He doesn’t see that living in his own head and craving superiority over others only results in hateful isolation.

John Goodman, for all his charm, has always had a bit of menace about him: there’s a well of rage beneath his skin that you don’t want to poke into. He doesn’t unleash that beast in this movie, though. Instead, he affects a distant haughtiness that’s perfect for the role. Some viewers might be confused at his inclusion in the story, as it seems ornamental, but the performance is too tremendous to leave out. I also think that his presence facilitates a certain decision for Llewyn, one that will devastate most audiences. God bless Mr. Goodman for making it unforgettable, and God bless the Coens for bringing us one of the best movies ever made. 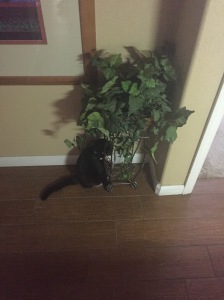 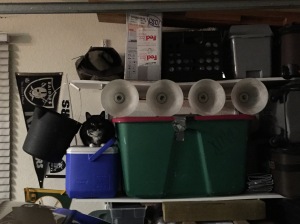 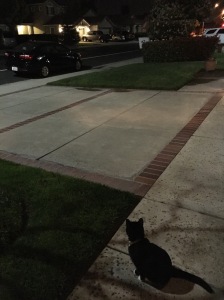 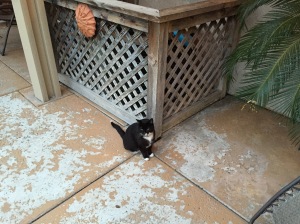 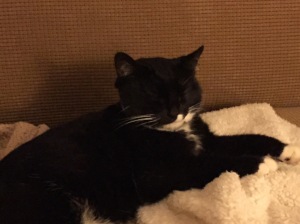 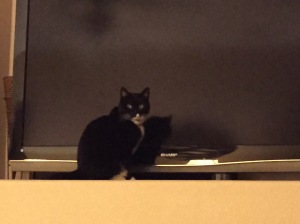 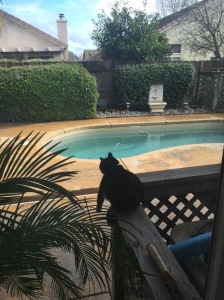 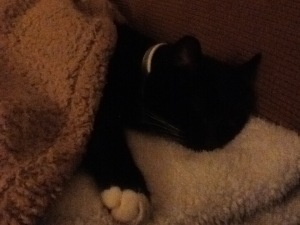 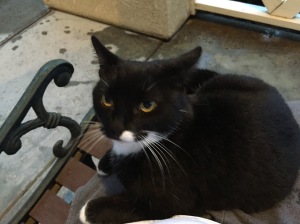 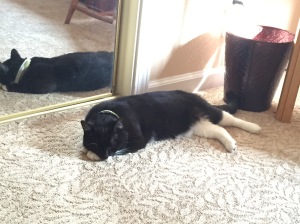 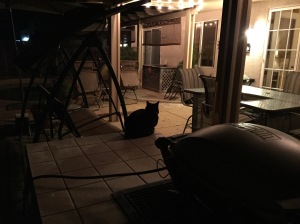 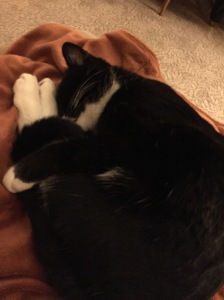 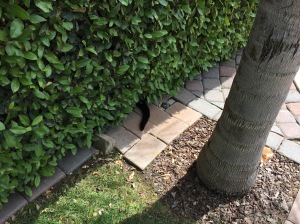 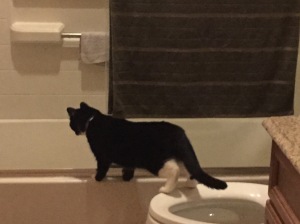 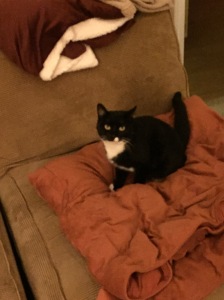 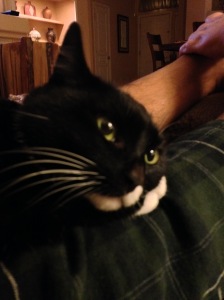 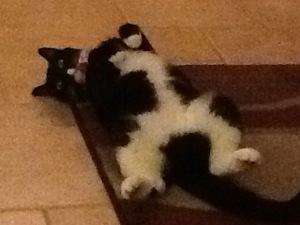 Photos of the cat. She’s my little buddy. 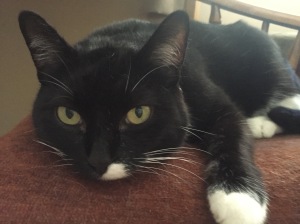 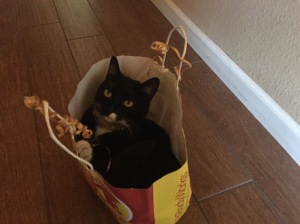 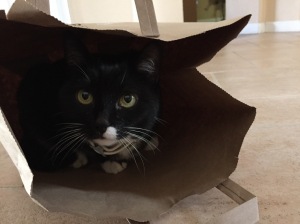 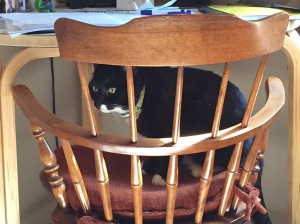 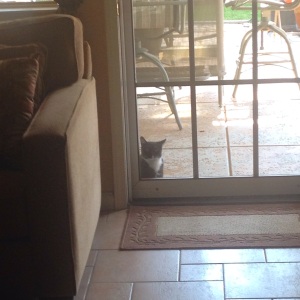 There’s a neighborhood cat who stops by my home every few days. My family calls her “Mr. Nibbles” even though she’s a girl. We call her that because she gently bites my fingers when I pet her. With each visit, she gets more and more comfortable, and she’s grown to trust me enough to fall asleep in my lap. She doesn’t want anything to eat, as she’ll only take a tiny bit of food or milk and then refuse the rest. 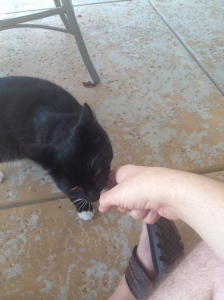 I think she just wants to feel safe and loved somewhere as she makes her rounds across the neighborhood. I imagine she has a number of families that she visits, in between her dog-dodging and mouse-hunting. I miss having a pet, and she doesn’t seem inclined to cause trouble, so I enjoy her company. 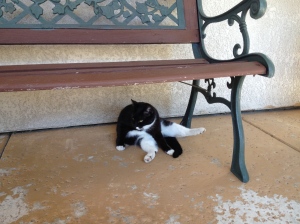 I’ve heard that cats communicate with each other somehow, and I’m curious to know what Mr. Nibbles tells the neighborhood cats about us. She must be keeping us secret, because no other cats have shown up here. Maybe she says we’re horrible people whom they’re better off staying away from so she can have us all to herself.